Derbyshire Healthcare colleague Simon Rose has received the prestigious President’s Medal from the Royal College of Psychiatrists for his efforts to promote patient involvement in mental healthcare and psychiatry.

Simon, who is Derbyshire Healthcare’s Lived Experience Educator and a patient representative for the Royal College of Psychiatrists, attended the college’s International Congress event last week as a guest of College President, Dr Adrian James, to receive his award along with the other six recipients of this year’s medals. 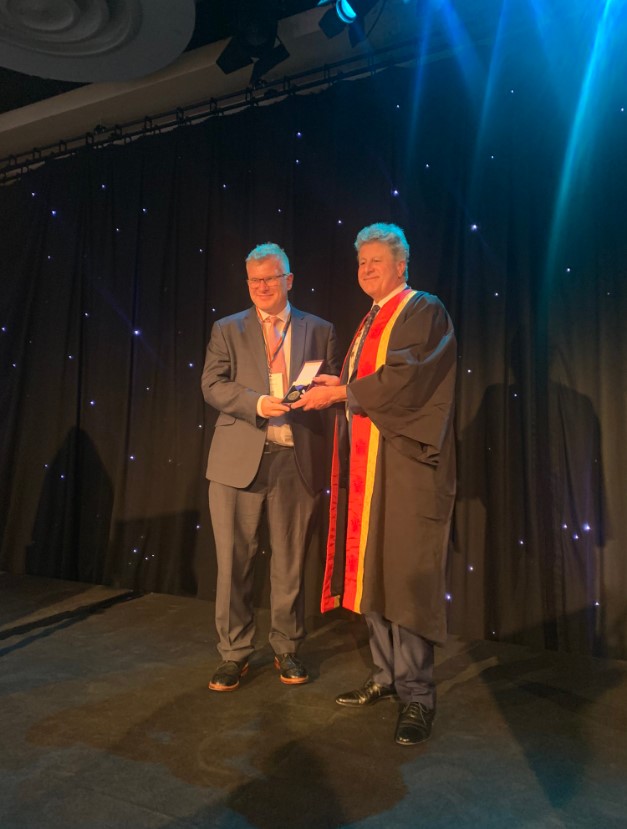 The President’s Medal particularly honours work that contributes to policy, public knowledge, education and meeting population and patient care needs in diverse and challenging circumstances, with the aim of improving the lives of those with mental illness.

Simon was recognised for his work as a patient representative for the Royal College of Psychiatrists, which has led to many valuable contributions such as the Working Together model, feedback as a Patient Representative on the governing council of the Royal College of Psychiatrists and work around patient safety for NHS England, which was supported by Simon’s 25-year experience as a patient receiving both community based and in-patient care.

The college also noted Simon’s passion for involving patients in the education of doctors and psychiatrists – an area of expertise that Simon has developed in his role as Lived Experience Educator within Derbyshire Healthcare’s Medical Education department and having spoken at many conferences on the subject.

John said: “Simon’s work in supporting around 50 people with lived experience of mental illness, to be involved in helping improve tomorrow’s doctors to be as good as they can be, has been the driving force behind the award.

“What an achievement for both the Trust and Simon! Everyone here within Team Derbyshire Healthcare are very proud.”

Simon described the award as a “real honour”, and he said: “Being recognised at this level is really humbling and it makes my efforts worthwhile.

“It is so important to listen to those with lived experience to better understand our service user needs, to ultimately provide better care for them.”