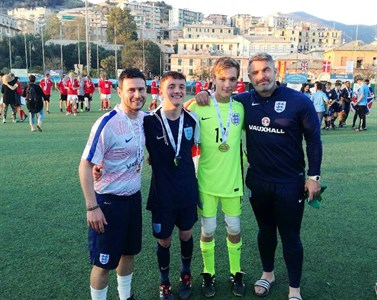 A Derbyshire teenager with a passion for football achieved his goal to play for his country in an international tournament - and won gold. And he attributes a good deal of his success to the help he has had from Derbyshire Healthcare Trust Children’s Services.

Saul Simpkin pulled on an England shirt for the seven-a-side tournament in Italy, and was delighted to be part of the England U19s team that won the event at the European Para-Youth Games in Genoa.

And the achievement is all the more special because Saul (17) has cerebral palsy which affects both his legs. Saul, from Draycott, gives a big part of the credit for his success to his physiotherapist Jackie Danvers, who works in Children’s Services at Derbyshire Healthcare NHS Foundation Trust.

'Best feeling in the world'

Saul was one of a 14-man squad playing for the cerebral palsy England U19 team, who competed over a five-day tournament. They defeated Spain and Denmark in their opening games before winning 3-0 in the final, again against Denmark.

He said that playing for his country was “the best feeling in the world”. He added: “When you’re a kid and you’re growing up playing football, you dream of putting on that shirt and getting that cap, so it’s just a dream come true.”

Saul has also been supported during his footballing career by Derby County Community Trust, and he now works at DCCT as an apprentice coach. He says his motivation in his role is to inspire others to play sport regardless of their circumstances, and to impact their lives positively through sport or physical activity – just as he has done.

But modest Saul underplays his achievements. He said: “I’m just an ordinary lad who wants to play football.”

Jackie Danvers is a paediatric physiotherapist and clinical lead at Derbyshire Healthcare NHS Foundation Trust, which provides services to children and families in Derby and South Derbyshire. Saul has been accessing Trust services to help him since he was a year old, and Jackie has worked with him since he was four.

She said: “We like to think we are helping the young people we work with to achieve their goals. Saul was always so interested in football, but he felt he couldn’t play because he had to wear splints. But he wasn’t going to let that stop him – a favourite picture of Saul is of him aged about eight, playing in his splints on the Pride Park pitch and scoring a goal.

“We used to talk about footballers and how they sometimes had to undergo surgery, which really helped him when he had to have surgery on his legs. He was worried about whether he would get back to his previous level of fitness, it took real perseverance but he was determined.

“Now in his new role as an apprentice coach at Derby County Community Trust he is inspiring young people with and without disability, which is absolutely amazing.”

Saul’s success story was told at a Children’s Conference staged by Derbyshire Healthcare Trust Children’s Services at the Research and Development Centre at Kingsway Hospital.

Saul’s cerebral palsy affects his movement and co-ordination. He has also had to undergo serious surgery on both his legs during his teenage years.
He was first inspired to take up football after the suggestion from Jackie. He said: “Jackie Danvers, my physio, suggested I had a try at playing football. I guess I must have been a bit energetic.”

He started playing football in 2008, playing at first for a cerebral palsy team in Bingham, and moving on to Derby County in the Community’s Ability Counts sessions. At 12 he joined the invitation-only Derby County Player Development Centre and he was also scouted for the East Midlands Cerebral Palsy Centre of Excellence.

'He can do anything'

He underwent surgery on both legs at 14 and rehabilitation was tough. But he was determined to get fit again and in 2016 successfully trialled with the England U17 CP Squad. In 2017 he started to train with the England U21 CP Squad and in October last year Saul finally achieved his dream of representing his country.

Saul’s dad Mark Simpkin echoed his son’s thanks to all those who have supported him. He said: “We were told he would never be an athlete, never ride a bike, but my take has always been he has the ability to do anything a ‘normal’ lad can do.

“He has had some real tough times, surgery twice, so many visits to hospital and physio sessions. A big thank you to all the professionals that have supported Saul – he would not have come so far without such wonderful support.

“All of this might never have been achieved without the network of support he has had from health professionals, in particular his most amazing physio. Jackie’s support and level of care in my view has been second to none.”

Saul has some great words of advice for anyone dealing, as he does, with a disability or any other barrier to success: “Setbacks are only setbacks if you allow them to be. You need to use them as a springboard to get where you want to be. Never doubt your ability but doubt your limitations, stay hungry, be yourself, enjoy yourself and never stop dreaming, never quit.”

And he is already preparing for his next challenge. He said: “I’m looking to go to the CP World Games in Spain later this year, to play in the International Federation of CP Football U19 World Cup – so it’s just a case of getting my head down and working hard for that.”