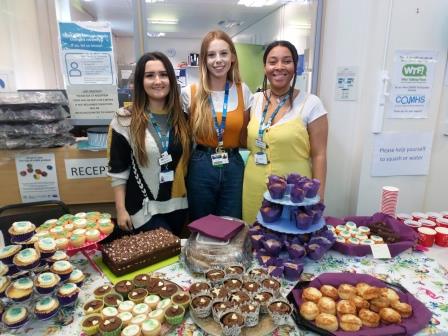 The event at Temple House in Derby, which celebrated the work of our CAMHS (Child and Adolescent Mental Health Services) was attended by about 150 people and raised more than £670 for worthy causes – more than double the total raised by a similar event last year.

It was opened by former Rams stars Roy and Roger, along with Trust Director of Nursing and Patient Experience Carolyn Green. It featured a cake stall, information stalls about the work of the Trust and partner organisations, craft sessions and a raffle.

The focus of World Mental Health Day this year was suicide prevention, and many of the CAMHS team wore purple to support charity Papyrus, which works to prevent suicide in the young, or yellow in support of the Young Minds #HelloYellow campaign.

The logo on the T-shirts worn by the CAMHS team was designed by a Trust service user.

The total raised from the raffle on the day was £551.46, with a further £120 raised for Papyrus outside the day itself. £40 of the money was donated specifically to CAMHS, £255.75 will go to Why Talking Fixes: The Will Garvey Trust Foundation, which aims to raise awareness of suicide and mental health difficulties, and £255.75 will go to CAMHS participation.

Feedback was invited on the day via a smiley face system, and 120 smiley faces – and no sad ones – were submitted.

CAMHS Expert by Experience Leanne Walker, who organised the event, wanted to thank all the members of the CAMHS team who were involved in putting together the successful day. She commented: “The teamwork for this event has been incredible and I feel very happy and proud of what we have achieved.”